Retreat or not retreat? That is the question. 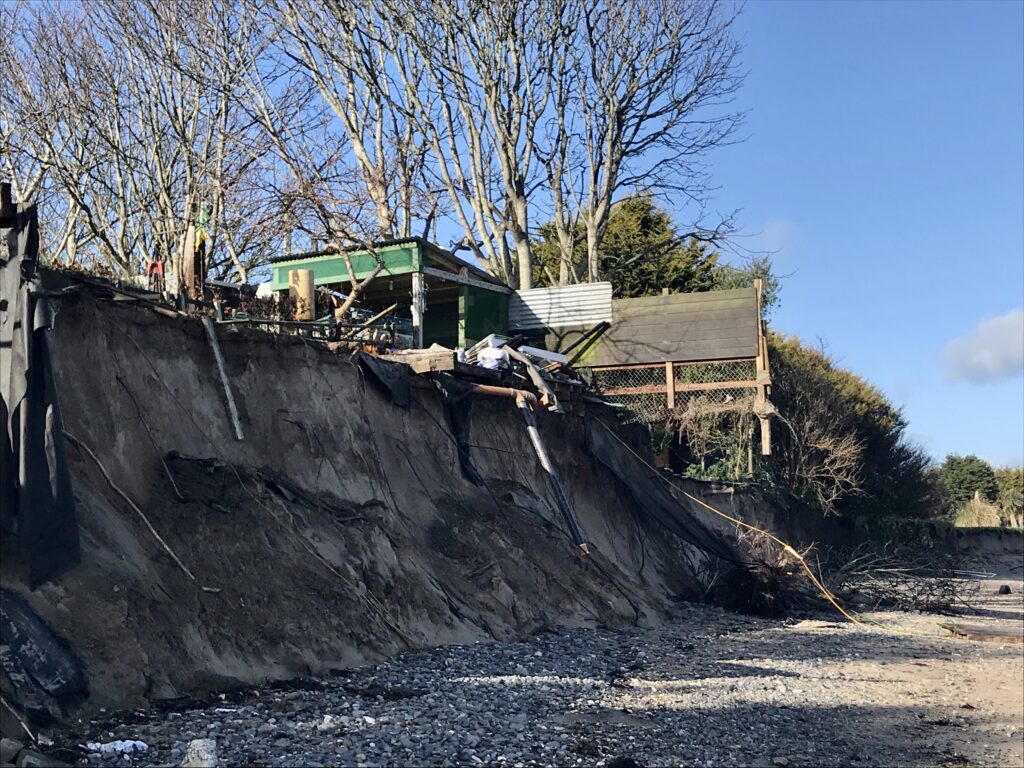 The Burrow in Portrane is a sandy spit of land in North Dublin that separates the Rogerstown estuary from the Irish Sea and is currently facing drastic coastal erosion. The peninsula was created during the Quaternary geological period when the melting ice sheets made sea level rise from 100 meters below sea level to its current position (stabilising 5,000 years ago), forming this barrier-island system1. A barrier-island system is a sand dune spit between a coastal lagoon and the sea. The exposed sediment was moulded over thousands of years by this dynamic coastline system through the power of the wind, the sea and the waters in the Rogerstown estuary. However, this coast is still changing.

The occupation of Portrane dates back to the 12th century when it was an important fishing centre2. The beach front occupation, however, is a recent phenomenon led by the construction of holiday homes. Despite the privilege of having a house with a sea view, the proximity of these housing developments to the dunes places them in a risky situation, especially in times of climate change.

Over the past number of years, storms are becoming more frequent and intense, and the dune system on the Burrow is losing its capacity to serve as a natural buffer against the energy of the waves, especially when storms occur combined with high tides, so-called “storm-surges”. The replacement of the dunes native vegetation by common grass has reduced the dunes capacity to trap the sand and because of that, each year huge amounts of sand is lost to the sea. Furthermore, the increase in estuarine reclamation and the construction of the Dublin to Belfast railway line across North Dublin estuaries has reduced the volume of the tides and weakened the ebb and flood currents3. This disruption of the tides has led to substantial hydrodynamic and morphological changes in the Burrow, which combined with an increase in the recreational pressure, have been responsible for recent degradation and shoreline recession in many of these barrier-island systems3.

Recent studies found that the Burrow beach dunes system retreated landward by more than 20 meters since 20134. Owing to the low lying nature of much of this sandy spit, it is believed that the current threat of coastal erosion not only presents an immediate structural risk to assets and infrastructure along the frontage, but it also presents a very significant flood risk to the Burrow if the dune system was to be breached4. Studies found that the expected flood damage costs at the Burrow could range between €154k to €2.8m depending on the future climate scenario considered and the consequent rate of erosion.

Fingal County Council is commissioning studies to better understand the nature of coastal erosion, future trends, and to identify the technical and economic viability of potential solutions that could be implemented to mitigate the flood and erosion risk in this area. The best solution found would be to install eight groyne structures on the beach combined with beach nourishment to halt the erosion and to install flood embankments at the western side of the burrow to prevent flooding in that area. This option would cost approximately €15m to be implemented with an additional maintenance cost of approximately €8k p/yr. and €6m for constant beach nourishment until 2100. Alternative schemes, such as rock armour and embankments would have a lower cost, however, with a negative social impact and adverse consequences to the nearby environmentally designated habitat.

A more extreme solution would be to gradually remove the houses from the dunes area and let the ecosystem naturally find its balance again. This option is called “Managed Retreat” or “Coastal Realignment” and despite being a tough decision, it is being considered and implemented in other coastal areas in the world5, 6 due to the unpredictability of our future climate. Since currently there are no policy or financial instruments available for the local authority to implement the coastal realignment alternative, this option should be further discussed with the society. The Irish government recently organised the first meeting of the National Coastal Change Management Strategy Steering Group, which aims to examine how Ireland can best manage its coastline and mitigate the risks from rising sea levels and more frequent extreme sea events7.

5 – GREENPEACE. 2020. Returned to the sea: the village that could be lost to climate change. Link:https://youtu.be/3E-xSXb9s0k